Sometimes there is a good reason to break convention…

…often there isn’t.
We stayed with family for a week over Christmas, most of which amounted to a thoroughly enjoyable (and generally usable) experience but there were a couple of niggling things that warrant ranting about.
The place that we were staying in was a reasonably modern house in a small beachside town that is a quiet retiree community 11 months of the year and a whoreishly noisy party machine the other month of the year.
At the house there have been a few minor modifications and renovations since said family moved in a few years back, including replacing some (but not all) of the taps.
So the taps…
We all know how taps work, right?  “Lefty loosey, righty tighty” and if you are lucky, the hot is on the left and the cold on the right.  A set of conventions that has served us reasonably well for quite some time I would venture. 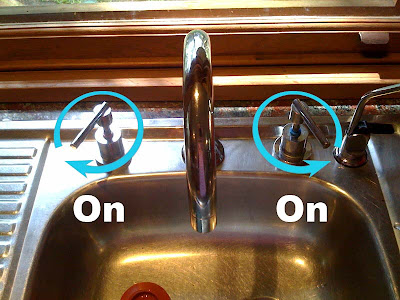 …Until, that is, somebody decides that it is much “cooler” if  taps turn on when we rotate the handles outwards – away from each other – so that they part with a sort of opposing symmetry.
In other words; cold turns on by turning anti clockwise (as per normal) and hot turns on by rotating clockwise. 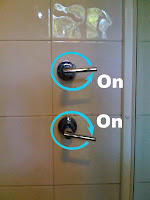 I am baffled as to why anybody would design taps this way but here are a few possibilities:
1. They think it looks more symmetrical in the marketing brochures when both taps are on and water is gushing forth with luxurious abandon.
2. They think it is some hip throwback to an archaic and outdated “Roman” design that “suggests a refined primitiveness and simplicity” or some such gak.
3. Rather than being forged in the glowing coals of greater utility or usefulness, they think new design is forged in the electric fireplace of novel innovation. 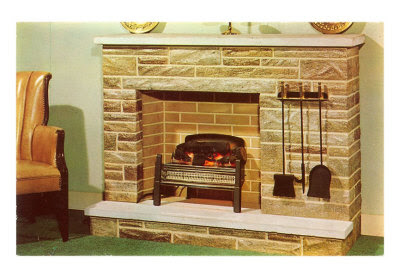 Who cares? Well we all should.   It is terribly frustrating to find that an everyday action, that almost relies on muscle memory, can be confounded by a “new” design that offers no apparent advantages over the old... particularly when hot water is involved!  It is a very odd feeling to need to think consciously and act gingerly when turning on a tap after using the can.  After a week we finally got used to it and then had to unlearn everything when we came back to our house.
Don’t get me wrong, I don’t want to sound like some design conservative.  If the new approach advances things significantly, enough to trump an established convention then, I’m all for it, but…
I propose that we scrutinise new approaches to determine if they breach the threshold for superseding old conventions. 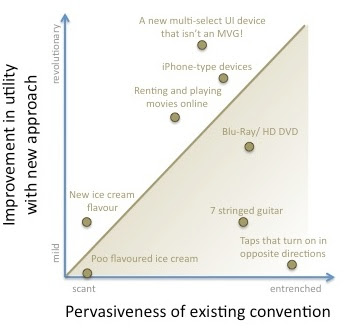 Items above and to the left of the threshold would be worth pursuing.  Anything else is likely to end up as examples in books by Don Norman (bring on the flamefest about Blu-Ray home cinema geeks).

Matt Morphett
I have fifteen years experience as a consultant specialising in Human Performance and Information Technology. I work with most aspects of user and business requirements analysis including user research, interaction design and usability evaluation.